This morning is Spa morning. Originally planned for the morning after dancing but has turned out to be the morning after getting a stiff neck and back from watching football, instead. No break at Center Parcs is complete, in my opinion, without a trip to the Aqua Sana spa for treatments, spa sessions or both.

With numerous steam rooms and saunas on offer, set around the revitalising outdoor quad complete with spa pool where you can enjoy powerful jets and bubbles to massage away the aches and pains. There is a zen garden on the lower level and balconies with various styles of relaxing seating on the upper level. Water beds, both single and double are their for your relaxation, along with a supply of cool, but not chilled, water and fruit for your enjoyment. The compulsory softly piped relaxation music fills the air and unidentifiable fellow guests adorned in white spa robes and towels wander around in a truly zoned out of the real world state.

Hubby and I had just left the intense heat of the Tyrolean Sauna, he had headed to the ice fountain whilst I was braving the tropical rain shower – when I say braving I managed as far as my upper arms, squealed a little too loudly, and stepped straight out. Gone are the days when I would launch myself full on into the plunge pool with my children! I emerged to find hubby talking to his nephew who had apparently started working at Center Parcs only a few months previously. We had spent the usual amount on entry to the Spa and we discovered that if we had known he worked at the Center and had contacted him he would have been able to get us in on the best mates rates EVER – a fiver each! Will be storing that little gem for future reference, indeed. He visits the spa before starting his shift on many occasions – what better way to prepare for a day as a busy lifeguard?

We opted for the Pancake House for our lunch as we had not visited there before. In hindsight, we could have chosen from either sweet or savoury pancakes, but in our innocence, some might call it greed, we felt that etiquette dictated we have a savoury followed by a sweet. Who wouldn’t – now be honest! Wow! We were so stuffed that we positively rolled from the restaurant, bloated and ready to relax. Heading for the beach at the edge of the watersports lake, we found ourselves two sun loungers and melted into them with ease.

Only managing an hour or two of sunshine, as it was by this time very intense, we showered back at the apartment and headed back to the centre for the last evening of this break. We found ourselves at the end of the children’s disco when the DJ was hotting up for the remainder of the evening. We were in the mood for a dance, we hadn’t danced all week which was unusual for us, so we found a secluded spot where we wouldn’t look like we were showing off and had a few dances. No dance shoes meant dancing bare foot but we ended up dancing until midnight. We didn’t partner dance Ceroc all evening but had a fun jigging session. Was such a great vibe. The DJ was excellent and knew how to keep a floor filled with modern music and a fair bit of cheesy thrown in.

Dancing with no shoes results in this mess: 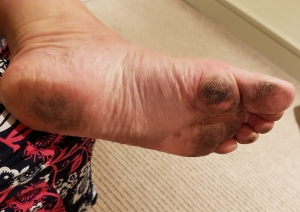 Our last day was a simple one. We packed up the car and vacated our apartment by nine. We had breakfast at Foresters Inn – a hearty full English if you please – followed by badminton at the centre. I didn’t win but was a close second. We walked, we sunbathed on the beach and had lunch and coffee on the terrace above the village centre. Beautiful sunshine kept us there until mid afternoon when we decided to leave for home. This has been such a great week. Hubby is truly the best company I could have asked for. We have laughed over 95% of the time, with the other 5% given to my complaining about being saddle sore from cycling for one day. At least I have proved my point and we wont be hiring those dreaded two wheeled monstrosities next time.