Tomorrow is my best friend’s birthday. At just fifteen months younger than me, she is turning forty nine although, much to my dismay, I am the one who never gets questioned while so many people refuse to believe she is anything over twenty five. In my eyes she’s as old and haggard as me and I just cannot see what they see!

Joking aside, it might seem strange for someone who is fast approaching fifty to refer to a friend as a ‘best friend’ but never a truer word was spoken and when I met and became friends with Sarah, little did I know that thirty years later we would still be such good friends. 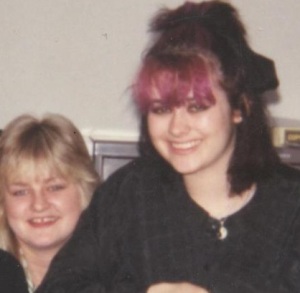 We first met when I started work in the office of a local factory, way back in 1988 and Sarah was already working there as an assistant in the accounts department. I had been employed as a production control assistant working alongside around twelve others in a large, open plan office space. My first memory of Sarah was her sneering at what I felt were hugely fashionable Scholl wedged sandals. She surely had no idea, with her black and purple crimped hair and dark black make-up I made it my mission to avoid the rude little Goth! 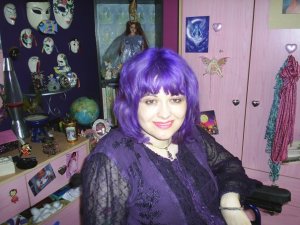 In the weeks that followed, rather than avoid Sarah, we got to know each other a little better, quickly becoming firm friends with matching fully-stocked filing desk drawers. We would head to the staff canteen, taking the service lift which accommodated Sarah’s wheelchair, and meander through the factory to talk to some of the workers, one of whom was my own father. We would enjoy leisurely breaks and return to the office with more stocks for our drawers. We both had a substantially-sized drawer – hers filled with crisps and rolls while mine was full of sweet treats and chocolates, some things never change. We have been friends ever since and I have never met such a loyal, thoughtful, caring person. We have been through huge ups and downs in both of our lives and have always been there for each other. 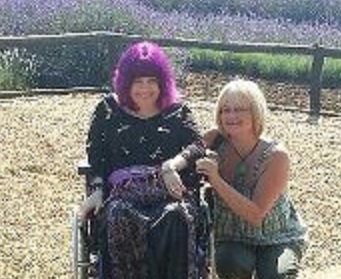 There are many who might have considered me heartless for giggling helplessly as I rubbed her back while she puked up too much Pernod and blackcurrant over the side of her chair outside The Bull in Dereham, but some things are too funny to let go. I mean, purple vomit? Who’d have thought you could coordinate your own vomit with your hair colour! Before Sarah owned an adapted car, we used to go out in my car and lifting someone your own weight is no mean feat. Often I would lose my grip and Sarah would end up sitting on the door ledge of the car while we both struggled not to cry with laughter. It would take more than one attempt to get her in when that happened and we both lacked the grace and decorum expected of two young ladies. With her purple and black crimped hair, heavy dark make-up and matching clothes, and me with my blonde, or whatever shade of orange or yellow it had gone that month with my attempts at home dye, also crimped, hair and whatever make-up took my fancy on occasion, we must have looked like a funny pairing. 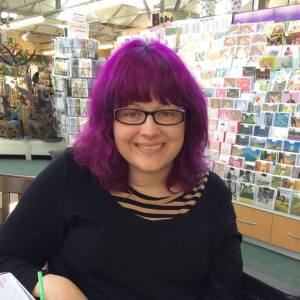 Sarah has supported me through various boyfriends, fiances, husbands and even a girlfriend/ fiancee, with good humour and a generous shoulder when all went pear-shaped. As honorary godmother to my three children, offering them sturdy advice as they grew, she often accompanied me to the school gates to collect them. We would go back to wherever my hat lay at the time and listen to their tales, their friends and their playground woes. I am happy to say Clive, my husband, gets on really well with my best friend. So much so, he worryingly (for us both) calls Sarah his ‘wife number two’. Wherever we go, we always have plenty to talk about and there are always some belly laughs to be had. 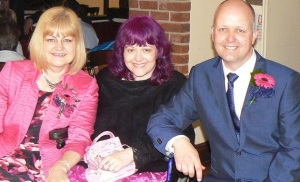 We have been through some terrible, tragic times together, such as Sarah losing her mother and her younger sister, both many, many years too soon. But its what good friends do. They support each other through thick or thin and are always there for each other, even when words just won’t do. If advice is needed, we offer honest opinions, sometimes when its not what the other really wants to hear.

Sarah truly is the yin to my yang and I could not wish for a better friend. With her shocking pink – yes I do know it’s called rose red – hair, matching pink, flowing skirts and beautiful smile she is, along with my children and husband, one of the best people ever to have come into my life.

Happy birthday beautiful lady. Love you to the moon and back. xx 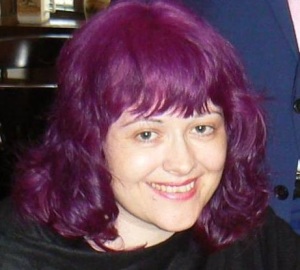 View all posts by

2 thoughts on “A Lasting Friendship”