My mum was in her early seventies when an already nasty chest condition, Fibrosis, suddenly became so much more. She had been experiencing breathlessness on a regular basis since before my dad, her husband, passed away a few years before but now it was becoming debilitating.

Appointments, x-rays and tests at the respiratory clinic of the local hospital revealed scarring on both but, more importantly, more pronounced on one, of her lungs. Breathing was fast becoming a struggle and everyday tasks became more than just chores, they became almost impossible to carry out. A persistent cough, often resulting in a sticky mucous, prevented this once-confident and proud lady from leaving home much if at all. Not the best condition for a recently-bereaved person who needed the company of others. Fearful that she would cough hard enough to induce vomiting, she ventured out less and less until only the most necessary of trips out were made and, only after meticulous planning.

As a family, we found this difficult to comprehend at first. Why was our mum and grandmother no longer keen to come to our homes and spend time out with us? We pushed her to join us at events such as Christmas or birthdays or a slow walk at the beach but there was always an excuse, a reason not to join us.

Mum’s consultant seemed to evade a lot of her questions, giving the vaguest of responses. I found him quite rude and offhand, initially,  but we later discovered he was confused and a little puzzled because of the way in which her symptoms were presenting. This was not a standard fibrosis diagnosis but every six months, further x-rays and scans were taken which were giving a wider picture of the progression of the illness.

Restricting as the constant coughing and breathlessness were, none of us were prepared for the next phase. For a while before she admitted it to any of us, Mum had been coughing up blood. Just spatters at first, into a tissue, and then slightly larger amounts, at which stage she became more concerned. Having lost her husband to lung cancer, we think she had convinced herself that she was to meet a similar fate, and she eventually confided in us and allowed the consultant to progress further investigations.

One would assume that with the cough, the mucous and the inability to breath freely, the list of symptoms might end there. Surely that was enough suffering for one person to endure? But it was not to be. One morning after a particular spell of breathlessness, which included the unpleasant sensation of somebody sitting on her chest, crushing her very ability to draw breath, mum woke up with a metallic taste in her mouth. She sat up, intending to take a few sips of water, and instead was rewarded with blood pouring from her mouth. She coughed, and was presented with even more blood. She called my sister-in-law who called an ambulance and mum was rushed to hospital. They recorded that she had coughed up well over a 200ml of blood, and that was just the measured amount, so it was in fact much more.

At the hospital, mum was given a drug called Tranexamic Acid which, via a man-made form of amino acid called Lycine, prevents the body from breaking down blood clots, thus stemming the flow on a temporary basis. However, investigations were needed to find out where the blood was coming from. Scans and x-rays revealed the source of the bleeding and the likelihood of a condition called Bronchiecstasis. The irreversible scarring (fibrosis) was nasty enough but this new condition brought with it a whole new ball game. The airways in her lungs, already damaged, had become abnormally widened due to this condition, which had led to a build up of mucous, itself leading to an increased vulnerability to infection. The most common symptoms of Bronchiecstasis are a persistent cough for which there is no cure or alleviation, itself resulting in over-production of mucous and extreme breathlessness and, in very rare and complicated cases such as mum’s, coughing up blood which is caused by one or more of the vessels in the lung splitting open.

Mum has had many spells in hospital following larger bleeds (called massive hemoptysis) since this condition was diagnosed and there have been some successful treatments of some of the split vessels. The procedure is called a bronchial artery embolisation (or BAE). Amazingly, during this procedure, the radiologists insert a needle into the artery, usually via the groin or inner elbow, and a catheter wire is placed into the artery right up and into the damaged lung, sealing off the bleeding/damaged areas with minute particles. This is all done while the patient is awake and lying on a flat surface, which is extremely difficult when you have a persistent cough. Mum has had a few of these procedures and they keep trying, although the day will come when the bleed is so severe or her arteries so damaged that they can do no more but make her comfortable. The possible future scenarios are dreadful but we try not to dwell to much on that for now. 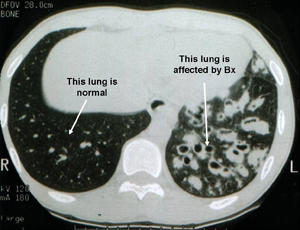 Mum is on a permanent low-dose antibiotic which is delivered via a nebuliser, as well as having a supply of Tranexamic Acid which she can start at home to control smaller bleeds, the agreement being that if they become worse she has to be taken straight to hospital. A massive hemoptysis, is coughing up more than 100ml of blood in a 24-hour period. Before this happens, and often as an early warning sign, breathlessness increases, which is caused by blood obstructing the airways. It’s slightly more difficult in mum’s case as she is constantly breathless, but often she feels more poorly when a massive hemoptysis is imminent.

If a younger, less fragile, patient suffers with this condition, surgery such as a lobectomy, to remove the most damaged part of the lung would be offered. This was investigated but the tests showed mum’s heart would not withstand the trauma of such surgery. So, for now, we all simply plod along from day to day. Mum does nothing much because exertion is too exhausting and she is fearful of leaving her home should an attack happen. If my mobile rings at any point before 7.00am, I can pretty much guarantee it will be my sister-in-law waiting with mum for an ambulance, alerting me to meet mum at the hospital to go through the whole life-threatening palaver again. 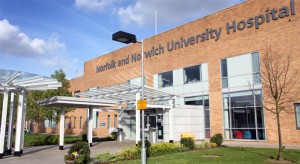 Her care whilst in the Norfolk and Norwich University Hospital has been very good, overall. She has been admitted to various wards and the staff, while over-worked, are always kind and caring. As family, we have been treated with kindness and compassion, especially during her worst episodes.

6 thoughts on “Bronchiecstasis – a cough too far.”