I cannot lie – I took this idea from a fellow poet as I loved the shape of some of her poems. Thank you for the inspiration, Kim from Writing In North Norfolk.

This is it in word format because my mobile formatting makes a mess of it..

Flight of the Kite

A break in the blue sky

Tension on line, a dead stillness

Bobbing at the end of the line, just waits,

A pull, a twist of the wrist, send it diving low,

A wrist flick, a jerk, paint the sky with loops,

Buzz from the line, hearing the winds,

Its flight over, now ended,

The early morning fog blanketed the town as my husband and I drove over to collect my niece and take her out for the day to celebrate her 12th birthday. Twelve! How very grown up this young lady has become, so deciding upon a suitable day out was difficult. We didn’t want to travel far, keeping within the county, because my mum is poorly in hospital and we needed to be nearby just in case.

Great Yarmouth on the East Norfolk coast seemed just the right place to head towards. Yes, the fog was quite dense but the forecast was sunny and warm for a late February day.

Wrapped in warm jackets, we headed off on our journey. Within a few short miles, the blinding early Spring sunshine was warming the car and had burned away most of the early mists.

Our first stop was an attraction I had first visited with my parents and grandmother over 46 years ago, the Merrivale Model Village. I had no idea if this would be something a game-playing, music-loving almost teenager of 2019 would find interesting but there was one way to find out. We had our photos taken which would appear in the giftshop later and allow us to be superimposed as miniatures of ourselves, and entered the tiny world.

Parts of the attraction were as I remembered them from previous visits with my own children and parts were updated to keep the areas interesting and topical. My niece discovered the push button sounds and interactions and was keen to hunt out more of the same. The delights of a modern-day NASA rocket and a suspension bridge over a pond of giant Koi Carp, giant by our standards not miniature standards, mixed well with old fashioned funfairs, maypole dancing and even medieval jousting and dipping. My niece especially enjoyed the sensory garden, although picking and tasting mint and herbs was unavailable due to the time of year. 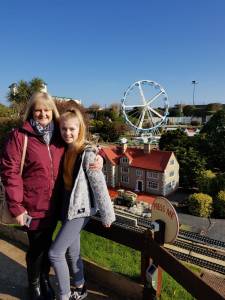 We steered little bumper cars around a driving area, another old-fashioned style of beach entertainment, watched a makeshift wedding party at a church, a fire engine rescue a girl from a burning window, with ‘real’ smoke emissions and then headed to the gift shop where we purchased a picture of ourselves in miniature. 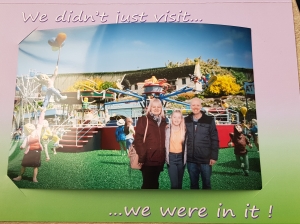 The Merrivale Cafe yielded treats such as homemade soups and pasties and traditional favourites such as tea and toast and cream teas. Refuelled, we used our day pass and re-entered the attraction to play a round of crazy golf.

At risk of overuse of the word ‘traditional’ we spent an hour playing the old-fashioned slot machines and 2p games, spending only £1 each, as the winnings just kept coming!

By this time, the sun was unseasonably warm so we grabbed some bags from the car and, stopping for ice cream cones along the way, made for the beach and a spot of kite flying.

My husband, an avid kite flyer, wanted to teach our niece how to fly his stunt kite. At over twenty years old, his ‘Top of the Line’ kite was in perfect condition and he had brought along a tail, 150 feet in length, which he had made himself.

To begin, he positioned our niece in front of him, allowing her to feel the pull of the kite while he held onto the straps for safety. She soon mastered how much movement was needed to create whirls and patterns against the bluest of skies and even had a turn at flying it herself. Giggles of delight and gasps of astoundment when she almost whipped an onlooker with the tail, were lost in the breeze as the kite danced and gave the onlookers a welcome aerobatic display. 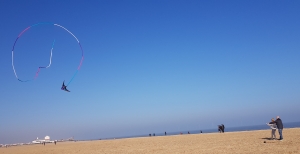 An hour of beach kite flying under blue skies, surrounded by a light breeze and we were ready to find a gift shop before returning to Norwich for our first ever meal in a vegan restaurant.

Trinkets and the obligatory Great Yarmouth rock purchased, we drove back to Norwich, parking the car at my workplace – a school in the heart of the city and set in the beautiful grounds of Norwich Cathedral.  My niece had never visited this part of the city and was awestruck by the cathedral’s dominance. We were a little early for our table booking so decided to go into the cathedral and show her around.

The choice did not disappoint and we were treated to the Cathedral Choir singing their hearts out, while my niece photographed tombs, stained glass windows and historical plaques. Even my husband noted there were parts of the cathedral he had not been into before.

My niece and I spotted the prayer candles and lit one for my mum, her grandmother. It felt a nice gesture and we included a donation.

We arrived at The Tipsy Vegan in time for our table booking and were pleasantly surprised. A lovely restaurant with friendly staff and a cozy atmosphere, previously undiscovered. Our option to choose a vegan venue was largely dictated by my niece’s vegetarianism and the lack of dedicated vegatarian restaurants available, when we searched. Pleased with our choice, we feasted on Saffron Risotto Balls, Korean Ribs, Sweet Potato Curry and Ricotta-filled Pasta Parcels, accompanied by home-made lemonade infused with charcoal, sour apple Palomas and blackberry and mint lemonade.  Our tastebuds were treated to a number of new delights, and all of them well presented and filling. 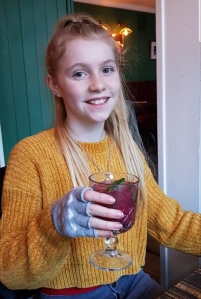 Even though we were full to bursting, we greedily walked to Sundaes Gelato, an ice cream bar, for desserts which we surely didn’t need.

Needless to say we didn’t finish our desserts, a food coma for all was almost induced, and apart from some picture taking of the Cathedral at night, our journey home completed our day of fun. Even if our niece didn’t sleep well, we were ready for bed by half past nine!

I am going to show you the Drum-box kites my husband is currently creating. Along with his brother I think the plan is to fill the sky with these latest designs. These instructions assume you are an experienced enough kite flyer to know how to add the spars and line at the end of the process but please do contact me if further information is required and I will send you more instructions.

First, the template needs to be marked out and created as shown below.

The two long edges need to be 890 mm but measuring a 10 mm concave.

The bottom edge is 540 mm with a 10 mm concave to the centre and the small flat top edge needs to be not quite pointed, but with a flat of 10 mm. 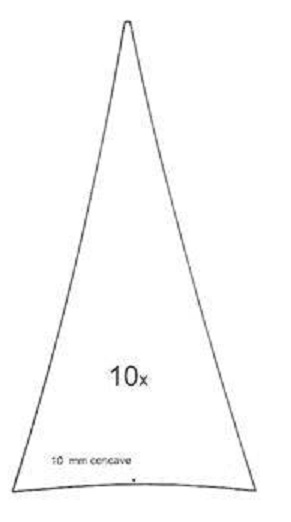 Ten sail pieces are required in whatever choice of fabric you have decided upon, but alternating patterns/colours look the most effective. The side edges and the wide bottom are slightly concave by only 10mm to the centre of each panel. The reason for the concave shape is that when they are all sewn together they will be as tight as a drum!

As you can see in the above image, the alternating design is effective and will look stunning in the sky. The sections are then all sewn together (as above) and then the two ends are joined to form a continuous circular shape.

At the almost-pointed end of each panel, he then created reinforcing pockets into which the spars would eventually fit. They start with semi-circles of fabric sewn with the edge lining up with the flat at the top of the triangles as shown below.

The overhanging parts of the reinforcing fabric need to be hotcut to remove and tidy.
The top and bottom edges of the fabric are bound in black to create a stunning-looking outline.
Next, you need to create ten pockets. Cut a piece of fabric 15cm long and turn over 1cm at the end and then fold in half (as below). 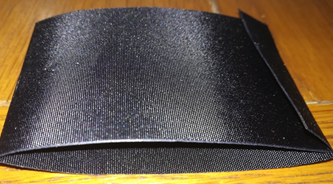 Turn the fabric over and fold in half with 5mm to spare as shown below.

Mark up the centre and then in between as shown here.

Pushing the edges inwards, first mark up and then sew straight along as shown below, sewing both sides to form the pocket.

Attach these two the almost-pointed ends, on top of the reinforcement semi-circles.
At each pocket-point, tabs are added which is where the flying line will be attached.

When the sewing is all completed, create your frame, using 10 carbon fibre spats which need to be 6 mm wide and each one just under 1 metre in length. A cap is fitted at one end which pushes into the pockets which were sewn in as above. The other end of the carbon fibre goes into a centre piece shown below – five pointing up and five pointing down.

Attach the line (if you are a beginner kite maker then do contact us for more information on this as needed), and your kite is ready to fly!
ENJOY!
Credit for the pocket images goes to Dick Toonen. My husband has used his instructions to create his kite and I look forward to sharing the images of his finished Drum-Box when the frame is finished.